Growing up in the Pittsburgh area, tortillas weren't really a thing. Our "tacos" consisted of a box of Ortega hard tacos and a packet of seasoning for ground meat. Oy vey. I hate to even think back to it and how much we missed not having authentic Mexican food around. Thank goodness Austin set things right.

Most of the damn "taco" shells were broken, too. WTF?!

Back Home, Years Ago

Even years later, I still didn't understand or experience true basics like freshly cooked tortillas. That is until I started working Downtown and going to the Strip District much more frequently.

That's when I began going into all the shops, bakeries, butchers, and bars along Penn Avenue and Smallman Street.

It's where I drank a lot of beer and ate a lot of street food in those days.

It's also when I discovered one of many diamonds in the ruff: Reyna Foods located at 2031 Penn Ave, Pittsburgh, PA 15222. Walking within a block of Reyna's will fill your nose with the sweet scent of freshly made corn tortillas. Holy shit, I can still smell the delicious sweetness they gave off!

Reyna must have noticed I looked really confused. She gave me a freebie tortilla to try. How nice is that? What a sweetheart! And it changed my whole perspective on my thoughts around tortillas and how the authentic version was nothing like I'd ever experienced from a supermarket.

I remember being amazed by their tortilla production machine every time I visited.

Oh, and there was other amazing stuff too: guacamole, salsa that was too hot for me at the time (I've since become a heat freak due to living in Austin), tomatillo salsa, sauces, and other groceries and goodies that I never saw in suburban Shop N' Save or Giant Eagle locations at the time.

It was an education just stepping into that place. I'll never forget it.

For those of you from Pittsburgh, you probably remember the Shop N' Save lady on those old commercials.

Fast forward to today, and I'll talk to you about the difference between Northern pseudo "Tex-Mex" and the real thing. Austin has been a great culinary experience with regard to Tex-Mex and inner-city Mexican cuisine. And down here, you CAN actually get freshly made tortillas, corn and flour varieties, from standard grocers like HEB that are spot-on.

You can't walk a mile in Austin in any direction without encountering some place that sells tacos, and it's amazing.

If only I had breakfast tacos growing up instead of shredded wheat lmao!

Enough of my bullshit memories. Let's get to where we're headed. And I'll go on ahead and let you know upfront that I'm really not a fan of flour tortillas at all for tacos. But they're versatile and simple to make for homemade dishes like wraps and even using them instead of bread with a salad or pasta.

Plus, who doesn't love the satisfaction of making something from scratch?

Here are the ingredients ready to be mixed: 240 grams of bread flour (2 cups), baking powder, salt, and extra virgin olive oil. You'll need some heater water, too. But that's it. The drink is a great white sangria that Quay made for me. It's peachy-keen.

I always weigh flour so the ratio of other things like yeast, salt, and sugar align with the amount needed.

For the dough, add all dry ingredients along with the EVOO into a mixing bowl and mix on low until combined. You'll need to scrape down the sides and add a bit more oil as you go, aiming for a crumbly mixture.

After you have a nice crumbly mixture, add ¼ cup of the hot water. Add more in small amounts until the dough combines and you have a resulting ball like above. It should be sticky and will fall right off of the dough hook.

Next, take small palm-sized amounts of dough and roll them in your hands to form a ball. While the ball rests in one palm, use your other hand to kind of knead it by pinching the sides into the center until it's cohesive and no big separations exist - basically a smooth ball of dough.

Place them all on a pan or sheet and let rest, covered, for 15-30 minutes. Enjoy some more sangria and get ready to roll.

Toss a little bit of flour on your countertop and rolling pin. To roll the tortillas, I first press them out as much as I can with my palm, keeping a circle shape.

Next, I use a curved rolling pin to get them as thin as possible without breaking the dough. I tend to roll in a clockwise direction to help keep a circle shape. At the end of the day, they're not gonna be a perfect circle without using a press, but I'm ok with that.

I roll a new tortilla each time the previous one is being cooked.

Finally. The fun part. You should already have a cast-iron skillet heated on medium heat.

No oil is needed. When the pan is hot, lay the first tortilla in it and let it cook for a couple of minutes. In the meantime, roll another tortilla. When it starts to bubble in the pan like above, it's time to flip. So go on.

You'll see nice browning after it's flipped over. Let it cook for another couple minutes. It's ok to lift it up and make sure it's not burning. After seeing a nice browning, take it out of the skillet to cool.

Repeat until all of them are cooked. Easy breezy, I tell ya.

These tortillas are surprisingly flavorful even with minimal ingredients. I used Easy Tiger flour from Austin, TX, which is part bread and part all-purpose.

While good as a snack on their own, they'll really shine with hummus, red sauce, or my intended purpose: tacos.

If you roll them too thick, they're still very usable and will be more like naan which is perfectly acceptable for other things.

I can't wait to cook up some breakfast tacos! 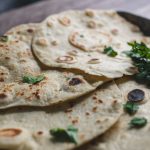 These quick flour tortillas pack tasty flavor and a soft texture that goes great with wraps, tacos, or dipped in hummus or red sauce.