If you're a snacker, you'll love these crackers. They're great alone, with cheese and fig sauce, or whip up some hummus to dip them into. Any way you shake it, you know you have to bake it.

With "artisan" crackers going for $7 and more in grocery stores, you'll feel great about making these tasty treats at home, for pennies on the dollar.

Pasta flour, rosemary, and parmesan cheese are the main ingredients - the others you probably already have in your pantry.

Fresh rosemary is key here. It holds up to the bake and retains so much flavor. You'll want to chop up a little over one tablespoon of these guys. Don't skimp - you want the taste in every nibble.

Leela likes cracker days because I make her a few without salt.

Check it: Tipo 00 flour, rosemary, salt, sugar, EVOO, water, and also some parmesan and Maldon which aren't shown... This is as simple as it looks.

See what the finished dough looks like in the mixer in this video:

After combining all ingredients in a mixer, mix until the dough doesn't stick to the bowl. Take it out, knead it a bit, and form a ball like the one above. This should take around 10 minutes.

Next, use a bench scraper or knife to cut the ball into four sections. Now for each section into a somewhat flat, rectangle shape that makes it easier to move through a pasta roller or under a rolling pin.

I use my KichenAid pasta roller attachment to roll the dough. It's thin, and I process it from the #1 setting to #4. I send it through #1 twice and sometimes three times, if it's rough, and pat it with a little bit of flour if needed after each pass through every setting.

It looks real, real nice, right? See all the rosemary bits in there? Gonna be so tasty. You can use anything to cut the dough into strips - bar scraper, knife, even the edge of a plate. I like my pasta roller that has a rolled edge to give it a classy, artisan look. Hell, the stuff at Whole Foods doesn't look this good.

After the pieces are cut, they go onto a silicone baking mat that's set on a baking sheet, are brushed with extra virgin olive oil, and then topped with crumbled Maldon. Since Maldon is flaky, you take a small pinch and crush it between your thumb and forefinger as you top the crackers. This results in smaller pieces that won't give you "salt shock."

You may notice I use a hair brush here. It's because it holds oil very well and transfers it to the dough when brushed - just like you'd expect. Silicone brushes are a waste of time for this. The oil doesn't transfer correctly and you'll end up stretching the dough. Do it right.

By the way, the Amazon Basics baking mats I bought are one of the best cheap kitchen purchases I've ever made. They're non-stick, super easy to clean, and roll up for storage.

Check these babies out. Great browning, partially due to the parmesan, salt that sticks, and nicely distributed rosemary. After all, we're looking for "an equal amount of blueberries rosemary in each muffin cracker.” (Casino)

I'd like to think I have these crackers perfected after trying multiple variations that included different, or no, amounts of olive oil and parmesan.

The olive oil softens the dough a bit and also provides flavor. The finished crackers, which have to cool before eating (this is when they get crunchy) have a great snap and crunch but don't make your teeth feel like they're gonna break. This is due to the small amount of parmesan that's added.

This is one time when crack isn't whack. 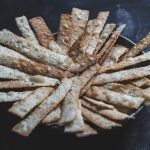 These make-at-home rosemary sea salt crackers will be a hit for all the snackers in your life.

This dough doesn't rise, so the cracker pieces can be close together.

Set your timer for 8 minutes, then begin to watch the crackers so they don't burn. Browning is ok.