I never used to make bread. I just waited until I visited me mum & dad, yeah, and hoped my mom would bake her amazing bread. So when I moved to Austin, TX, I knew I had to up my game and venture outside of Town Talk (jokes - I prefer multi-grain bread and baguettes), and make my own.

I love dipping home-baked bread in olive oil + balsamic vinegar + parmesan + salt + pepper. With focaccia, you probably don't even need to do that. It's kind of a one-package deal with everything included.

Focaccia is great because it is slightly moist, oily, herby, and salty - if you do it right. My fasha won't eat anything with rosemary these days because I totally screwed up a loaf (different type of bread) years back, which had way too much rosemary.

"Tastes like perfume!" he said... and he was right. As much as I love rosemary, I also had a tough time eating it.

Fast forward (too many) a few years later and I've gotten better at herb ratios. I don't like to measure things much, but as I get older, I can't remember shit. So, I started to measure some things. And I started to write some shit down... Yeah, here in this damn blog.

To me, focaccia should only be eaten fresh, within a day or two of baking. This small batch is perfect to curb my carbo-loving bread craving and is a great daytime munchie treat. I tell ya, I coulda finished this whole thing off on my own. Fuhgettaboutit!

I really wish I had fresh herbs on hand, but dry will do in a pinch. About a tablespoon each of thyme and rosemary ground up with a mortar and pestle works well. Let this marinate for 30 minutes with the oil and garlic if you have the thyme. Ha.

Prepare another 2+ tablespoons of olive oil and chopped garlic clove for later.

After kneading into a nice bread ball, set it into a bowl and cover with plastic wrap or a towel for an hour - having it double in size.

I use parchment paper, but you can also just use a bare cooking sheet. Spread the dough out until it's nearly ½ inch thick. Press your fingers into the dough all over to create the awesome divots that you see. Cover it with a towel for about 20 minutes - it will rise a bit before going into the oven.

After the second rise, drizzle olive oil all over and use a brush to spread it out. Sprinkle with a good helping of Maldon flaked salt.

After about 20 minutes, take that thang out of the oven and, you guessed it, spread on the olive oil and garlic mixture. Add some damn cracked pepper, too, to give it a punch. One last thing - sprinkle a nice bit of Maldon. Crush it in your fingers and make sure it's an even coating.

This is one you'll want to sample while it's still warm. So good. But let that olive oil and garlic sit in first - about 5 minutes. 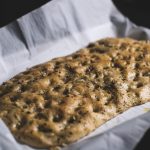 This is a great focaccia snacking bread to curb your carbo-craving. With rosemary, thyme, garlic, and olive oil, you'll be snacking until it's gone.

Cook time will depend on how thick your dough is.

The amount of salt added depends on you and your lifestyle & diet.