It's that time of year when soups become a part of my top-of-mind awareness. And since I've been a potato addict from the time I was born, potato soup plays right into my cravings. The nice thing about this dish is that it's not overly heavy even though it may look very thick and creamy.

It only uses whole milk, sour cream, yogurt, and a spot of chicken stock which can be replaced with veggie stock or not used at all. The carrot and celery provide a great base of flavor that doesn't overpower the dish.

I thought the carrot might sweeten things up too much, but it didn't.

This is such a basic dish. The Waiting is the Hardest Part (cooking down the milk and potatoes). We used one celery stick, three smallish carrots, two russet potatoes, a few garlic cloves, probably one quart of whole milk, a half to ¾ cup of chicken stock, and spring onions (for cooking and garnish).

Here's a look at the prep work. Quay helped out with the potatoes after I cut up the other things. For the onion, celery, and carrot, cut them on a bias to make 'em look fancy. Rough chop the potatoes and finely chop the garlic.

Get the broccoli ready by breaking apart large florets. Drizzle olive oil over them along with some salt and cracked black pepper. Add a dash of red pepper flakes to up the heat level a bit. Use any oven-safe pan or baking sheet.

On to the Soup

Heat a dutch oven on medium, add grapeseed oil. When the oil shimmers, add the celery and carrot and cook for a couple minutes. Add the garlic and ¾ of the onion (most of the white parts). Season with cracked black pepper.

After about 5 minutes, add the potatoes, milk, and chicken stock. Let this simmer until the potatoes are soft - poke with a fork or knife. Crack some more pepper. Then let it cook some more until it reduces to your desired consistency. I like it slightly thick but pourable, and starch from the russets helps get it to that point.

My dutch oven has been mistreated. I cleaned it after this cook and it looks like new again :D. The soup has reduced a bit and looks ready to go. Taste for salt and pepper, adding more as needed. Add in the sour cream, yogurt, and cheese. Mix until combined.

Have your oven preheated to 450º and roast that broccoli for about 16-20 minutes. You want char, but not an overly cooked, soft vegetable - it's what gives texture and deep flavor to the soup.

So here it is. Spoon a couple ladles of soup into a bowl. Add broccoli florets to the center along with some of the nicely-sliced spring onions on top of the soup.

Don't be opposed to a bit of finger-crushed Maldon on top of the broccoli, too.

This dish is peppery on purpose. Cracked black pepper goes so well with potatoes and is a main flavor component that shouldn't be avoided.

You might think celery and carrot might overwhelm the soup, but they don't at all. I was surprised, too. The milk helps temper and combine flavors into a very evenly-balanced broth.

I really love the charred broccoli here, though broccolini or cauliflower would work too. The flavor and texture are a great contrast to the softer veg and broth combo. 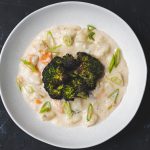 This chunky, rustic, peppery potato soup with charred broccoli with keep you warm and happy for days.

Add a small amount of Maldon to the broccoli for added salty goodness.

Add a pinch of red pepper flakes to the broccoli before roasting for a bit more heat.