If you need a break from pasta, soba noodles might be a solid bet. They're great warm or chilled and very at-home with the sautéed vegetables and chicken that go along with this dish. This is assuming, of course, that you like Asian dishes. If you don't, you should. If you still don't, keep Googling for some B.S. that won't be nearly as good as this.

If you don't like Asian dishes: See ya, wouldn't wanna be ya.

To start off, we get all the ingredients together and organize. ORGANIZE!

I want to be a little bit fancy, so I use my mandoline to slice carrots and cucumber. It keeps the thickness consistent and they look great.

Cucumbers have a ton of water content which isn't something we want for this dish. To help draw out that water, put the slices in a bowl and sprinkle them with salt. Set in the fridge until ready to use. They don't really take on the salt like you might think.

Moving on from the carrot and cucumber, there's still some knife work to do. Slice some serrano pepper, spring onion, red bell pepper, shiitake mushroom, and snow peas. I cut the snow peas in half at an angle just to make them look nice.

I screwed up by not taking a picture of the sauce. But don't worry, I'll explain it.

Yeah, so I screwed up. And I did it on a simple dish! What I'm missing is a picture of the sauce that will dress the noodles and vegetables. It's simple, though and here's the details.

The sauce is made up of low sodium Tamari, honey, sesame oil, and rice vinegar. Whisk it up and set aside for later.

Don't risk it. Whisk it.

We love chicken thighs. Grilled, fried, baked. And Leela does, too! The only ones we had in the freezer were skinless and boneless which are great for this dish. I would have preferred having skin-on, to get that salty, crispy texture, but it wasn't an option. Seasoning is simple: sea salt and cracked black pepper (as usual).

At this time, have a pot of water boiling and ready to cook the soba noodles. They take around 7 minutes, so add them right after the chicken goes into the pan.

When the noodles are done, put them in a bowl of ice water until the chicken is done.

Look at that sear! Even without skin, a crispy texture can be achieved with the right sear. What's the right sear? Medium-high heat for 4 minutes or so. This is similar to fish. Put the damn thighs in the pan with a neutral oil like grapeseed and don't move them. These guys cooked for just over 4 minutes per side.

I repeat: DO. NOT. MOVE. THEM. Let that sear develop.

Brush some sauce on the thighs and place under the broiler for 3 minutes.

When done, take them out of the pan and set aside. Drain the noodles and lightly dry them with a towel or paper towels and add to the sauce.

Anytime we do thighs, we cook an extra one for Leela. It brings us much joy to watch her inhale a whole thigh in one bite. So much for savoring the moment!

When the thighs are ready to be flipped, sauté the vegetables on medium-high heat with grapeseed oil. You want some color, but don't over-cook them or they'll lose their crunch - about 5 minutes. See the bright color on the peas? It's a great indicator of being "ready-to-go."

Now it's time to pull this thing together.

Add the veggies into the sauce with noodles and use tongs to stir everything around. Also roll up some cucumber slices and dip into the sauce.

Use a serving fork to twirl up a nice bunch of noodles and put them on a plate. Place some veggies and cucumber around the noodles and toss a chicken thigh on the side. Top with spring onion and serrano and you're ready to sit the hell down and eat.

The finished plate. Simple and no-nonsense!

This dish is a great way to introduce yourself to an Asian-style plate. It's simple and has components that you're already used to. For newcomers, the sesame seed oil, Tamari, and serrano will be standouts. Get used to it - and use them more often!

The chicken thigh preparation is simple but it's important to season them well with salt, and placing them under the broiler will caramelize the sauce a bit.

Cucumbers provide a balance to the serrano's heat and are also a light flavor against the noodles and sauce.

Overall, it's a fun, easy dish that comes together quickly on any given night. If you don't mess up, you'll impress yourself, your doggy, your neighbor, or your date. Or all of them.

The thighs the limit, so think big! 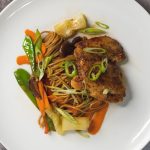 Seared chicken thighs with soba noodles and sauteed vegetables provide a flavorful, and easy-to-make meal great for any night of the week.