For a lot of years, a long time ago, I'd hear family members talking about "seasoning" cast iron skillets. I never really knew at that time what it meant. I don't think I cared, either. It was way before I got into cooking.

At the time, to me, seasoning just meant spices or salt & pepper. So that's what I remember being in my mind. How it applied to damn pan, I had no idea. Fast forward a few (a lot) of years later, and I learned it has nothing to do with my idea of "seasoning." Revelation!

I couldn't find a pic of this Lodge cast iron skillet when it was rusty, but believe me: you wouldn't have wanted to cook with it. Here we are almost three years after I brought it back to life and it's beautiful.

I oil the entire pan when seasoning. It stays nice and consistent everywhere.

This is my Matfer Bourgeat carbon steel pan when it was brand new.

There are as many methods of seasoning as there are opinions on global warming. Most of them use temperatures ranging from 200º-350º for durations of 2-10 hours, with cooling cycles.

I don't have that kind of time!

In fact, Matfer has a method on the back of their label that uses the stovetop along with potatoes and salt. What?!

Potatoes and salt caught my attention so I had to try it.

Basically, you fry potato peels until they're crispy while continuously stirring the mixture all around the pan. See how dark the salt got? Some of that is the pan's shipping coating that needed to come off.

Did it work? Not up to my expectations of a glassy, icy surface. I did it twice and moved on.

However, it does work great for removing the initial protective coating.

My next attempt involved the oven and something I hadn't done before: turning the pan upside down which prevents oil pooling. The picture above is after one hour in a 500º oven. I used grapeseed oil to coat it.

The surface was already smooth after one time, but since it was a new pan, I repeated the process three times. The pan did provide me with a non-stick surface for a few cooks, but then things began to stick. I used water and a scrub brush to clean it and also repeated the seasoning process multiple times. I became obsessed.

The pictures above are after 8 months of continued use and many seasonings. It's as black as the cast iron pieces! The surface is very smooth and it doesn't have as much texture as the lighting may suggest. This pan is like ice. Eggs float around it like skaters in a hockey rink.

The pan should never feel sticky.

Though it required more time than my cast irons, I don't have to season it nearly as often these days. It's finally got a great surface that's very non-stick.

I use my pan outside on grills or open fires. Look how jacked up it can look below.

It's still shiny, but needs cleaned up and re-seasoned.

Above is what it looked like after another seasoning session.

After seasoning, I can't wait for the weekend so I can do an Egg Test. Using a minimal amount of butter or EVOO, I cook an egg and then pick up the pan and attempt to swirl it around. If it swirls, I win, and Leela lets me live to cook another day.

How about myths and reality? (At least for me.) I rarely use soap to clean any of these pans, but I have done so if for no other reason than to see what would happen. Did it take the seasoning off? Nope. Did it cause soap residue? Nope.

I regularly use hot water and some type of scrubby thing, though. Especially with the grill pan. After cleaning, it's important to dry the pan with a towel. For my cast irons, I also apply a thin coat of oil and heat them on the stove to fully dry.

Seasoning pans was a mystery to me for many years, but in reality, it's really simple. That is, IF you find a method that works well for you. I did spend lots of time trying things that didn't work.

For example, the low-and-slow (low heat, long time) didn't work well for me. High heat for a shorter time period did, so I've stuck with it. I think it was Alton Brown who also mentioned wiping off all oil prior to putting the pan into the oven, leaving only a very thin layer. That's worked extremely well, too.

Oil is another factor. I used to use canola but started to use grapeseed as an alternative. And it works great. Obviously don't use a low smoke point oil like extra virgin olive oil. It will just burn.

Grapeseed oil is my go-to for all seasoning all of my pans.

Parting Words: Don't give up on your seasonable pans! They require TLC. Resurrect them if needed and care for them with regular seasoning, a pat on the back, and they'll treat you right for years to come. 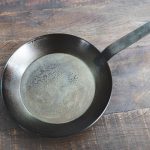 Seasoning your cast iron and carbon steel cookware doesn't have to be a mystery. It's easy to accomplish a non-stick surface.

Make sure to use an oven thermometer to truly know the temperature prior to starting the process. Because I use one, I know that my oven can be 25-50 degrees off of the digital setting for any temp above 400º. So I actually set my oven to 525º to ensure I hit that 500º mark.

Your oven typically will not be up to temp when it beeps. It may take 30-40 minutes to reach your intended temperature.