Well, it's that time of year again where fall and winter flavors become an automatic craving - without even thinking about it. Normally, I'd be back home pheasant and wookcock hunting with me mum and dad, but with the pandemic, things just aren't back to normal yet.

What's so great about pork tenderloin? It's cheap, fast to cook, and takes on the flavor of anything you desire. Spicy, savory, herby, you name it. And plain and simple with salt and black pepper works, too.

I think there are two keys to making a great tenderloin:

A great sear provides texture and creates fond that can be used for tasty pan sauces. Another bonus with pork tenderloin compared to pork loin is that it has a small diameter. This means you'll get a taste of the outside with every bite.

I use garam masala, cinnamon, cumin, garlic powder, cracked black pepper, and salt for this rub. Garam masala is a blend of many spices and is a must. Check that spoon out, too! My mom made it. There's more in our store.

I usually bring a bunch of spice jars out and decide how to combine them on the countertop.

Before applying the rub, prep the pork by cutting off any excess fat or silver. After mixing the rub ingredients, shake them all over the tenderloin and massage into the pork with your fingers. Wrap tightly with plastic wrap and toss into the fridge for a minimum of 30 minutes. I did about 2 hours this time.

I use two pears, a sweet apple, and about an inch of sliced ginger for the sauce. Brown sugar along with a bit of garam masala and nutmeg are added.

The fruit needs only to be roughly chopped since it will cook down. Nothing fancy here. Skins on.

Heat some oil in a saucier and begin to cook down the fruit. Add in any spices you'd like. I used a pinch of garam masala and some grated nutmeg. Cinnamon may have made its way in there, too. Once the fruit gets soft, add in a cup of water and let it cook a bit. Add in another cup, cover the pot, and let it simmer while you get on to other things.

Cut the bean ends off, roughly chop the shallot, and toss them with grapeseed oil, salt, and pepper. Set these guys aside. By the way, that's another one of my mom's homemade spoons! I use them every day.

Get on to Cooking

Now that the pan is on medium-high heat with grapeseed oil, sear it on each side for about two minutes.

After it's seared, melt two to three tablespoons of butter and add the pear halves, cut side down. Put in the oven for 10 minutes or until it reaches your intended internal temperature (for me, that's 140º).

By this time, the sauce should be done cooking down. Purée it with an immersion blender and put it back on medium-low heat. Reduce it until it reaches a thick consistency. Season to taste.

Once the pork is done, remove it to rest on a cutting board. The pears can stay in the pan until plating.

While the pork rests, sauté the beans and shallot until charred and bright green. Brush on the honey and balsamic vinegar mix and reduce heat while letting it caramelize a bit.

Plating is easy with this one. Just after the veg is done, slice the pork into one-inch cuts. Spoon some pear sauce on a plate and add the pork. Slice each pear half at an angle into three pieces and put on the plate along with the vegetables. Garnish with some cilantro and you're done.

The first thing that blew me away is how present the spice rub was on the pork. So flavorful, but not overpowering. The second thing is how well the pork paired with the sauce. Each component is distinct with savory undertones pulling them together. The beans and shallot are delicious with some char and the balsamic vinegar helps to clean things up.

The halved pear is like dessert and deserves to be paired with vanilla ice cream. It's sweet and very caramelized, still going great with a bite of pork.

Lots of pairing and pearing here.

We love cilantro, and it goes great with the spices - brightening things up.

This is a dish of great fall flavors that complement one another perfectly. 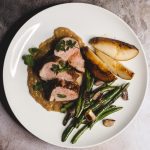 If you'd like a dessert to follow this main course, put the sliced pears in a bowl with a spoonful of vanilla ice cream.