I try so hard to plan ahead for dinners. Yes, I try. Giving it some thought, stalling on what I should make, getting distracted, then BAM it's almost dinnertime. The story of my life.

Our local butcher sells the best sweet and hot sausage. I keep a few packs of bulk and links for the days when I need to whip up something quick. They thaw fast.

Mama Cheryl used to make a dinner with kielbasa, taters, zucchini, onion, broccoli all tossed in foil then placed on the grill. It was one of my favorite meals. The flavors are amazing. This is a take on that. Very easy and you can use up any vegetables that are on their way out.

Heat grill to 375˚ with a cast iron skillet placed inside. Meanwhile, chop the potatoes, onion, peppers, and garlic. Once Heated to temperature, add the potatoes cooking for 10-15 minutes until almost soft. Add chopped vegetables and place sausage on the grill. Cook around 20 minutes until sausage is done flipping halfway through. Also, be sure to toss the potatoes around now and then.

I had zucchini that needed to be used, so I decided to add it to this tasty dish. Toss the zucchini in olive oil, salt, and pepper then place it on the grill around eight minutes before the sausage is done. 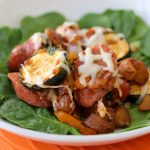 A satisfying sausage skillet with potato, onion, pepper, and zucchini.