×
You are here: Home / Dinner / Tilapia with Carrot-Top Pesto and Israeli Couscous
Jump to Recipe·Print Recipe

Tilapia... Some love it. Some hate it. Some are afraid of it. We fall into the former, but we're also picky about where we buy it. In Austin, it comes down to only two places: Central Market and Whole Foods.

It's a great fish. Kind of like the "chicken" of fish because it'll take on any flavors you throw at it. It's meaty, but still requires a delicate touch and isn't very good over-cooked. It cooks up hella quick, too, so you'll spend the majority of your time prepping and cooking your sides.

Tilapia is the chicken of the sea, dammit.

So let's get to it. We stocked up on a few things including carrots with amazing tops. I already wanted to make a pesto inspired by my Mom's Wild Leek & Walnut Pesto and Quay suggested I use those damn tops. It was a great idea.

The thing with carrot tops is that they are very bitter. They cook down well, but that bitterness needs to be tempered to keep things appetizing.

My variation on pesto includes some parmesan cheese, basil, and toasted walnuts. Of course it has EVOO, too.

Most pesto recipes call for using a food processor to combine the ingredients, but I like doing things the old fashioned way: with a knife and maybe a mortar and pestle.

Granted, this is a small amount of pesto. If I planned to make a cup or more, I'd probably use my small processor to save time. But there's a satisfaction that comes with making it by hand as well.

Small victories in the kitchen are underrated.

You can also control how chunky the nuts and garlic are. I like the random variations in size. It's artisan. It's custom. It's quality.

Mix everything together with some EVOO, a pinch of salt and pepper, and let it sit - stirring the mixture every so often.

I'm using just under ¾ cup of multi-colored Israeli couscous. Like risotto and rice, it expands as it cooks with liquid and this is the perfect amount for two plates.

Similar to my Halibut with Israeli Couscous and Cucumber dish, I'm using a risotto-style method to cook the couscous, starting with shallot and garlic.

After the shallot is softened and the garlic is fragrant, it's time to add in the couscous and toast it. Stir frequently until some color shows. Next, add in some dry white wine and cook until it's absorbed then add a cup of water.

As the water is absorbed, continue stirring. Add in diced red onion and red bell pepper along with another cup of water.

Cook until almost all the water is absorbed and the couscous is tender. Season to taste and set aside. It looks dry, but it's not. You definitely want some of the liquid to stick around.

Now it's time to cook the tilapia. Have a pan on medium-high heat ready to go as the couscous finishes. Add a couple tablespoons of grapeseed oil and cook the fish, about two minutes on each side, and set aside to rest.

Have a heated skillet ready to go as the fish finishes.

To tie something back to the pesto, I sautéd sliced carrots on medium-high heat with EVOO and just a pinch of salt and pepper. It's a great connection and provides a nice bit of sweetness and crunch along with everything else.

Here you have it! Everything comes together quickly when the couscous is done, so pay attention to what you're doing and don't eff it up.

Plating is simple: a couple big spoonfuls of couscous, fish on top, carrot on the side. Cover the fish with a layer of pesto and finish with a carrot top stem and light drizzle of EVOO. Oh yeah, sprinkle a pinch of chopped carrot top over everything because it looks good. Like Leela's face.

There's simply no dog in the world prettier than our Leela-Cakes.

This is a first-time dish creation for me and it turned out great. I'd cook it again exactly the same, but to step it up, capers would be added to the couscous to give it a slight kick in flavor contrast.

I love Israeli couscous. Quay turned me onto it a while back, and now it's a pantry staple. It's meaty and takes on any flavor you throw at it. It also stands up well to being reheated the next day but needs a bit of salt to bring it back to life. Cooking it risotto-style provides next-level flavor compared to just boiling in water.

If you've used carrot tops, you know how bitter they are. With pesto, that bitterness is tempered by the EVOO, parmesan, walnut, basil, and resting time. I only added a pinch of salt and pepper. Aside from that, it sat while I cooked everything else and I stirred it here and there. Delicious!

I'm not gonna argue about the good or bad of this fish. Pay attention to how and where it's sourced and you won't be disappointed. It's very versatile and holds up to rubs, pan-frying, or baking. Since I planned to top it with pesto, I chose sea salt and cracked black pepper as the only seasonings.

The sautéed sliced carrots were great and I'd use more next time. They're so sweet, and, again, just seasoned with salt and pepper. 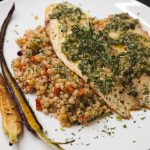 Carrot-top walnut pesto brings a punch of flavor to pan-fried tilapia while Israeli couscous is a meaty, full-flavored side that's a great alternative to risotto.

Add up to a tablespoon of chopped capers to the couscous near the end of cooking to add a bit more punch.